Do Dogs Know Themselves? 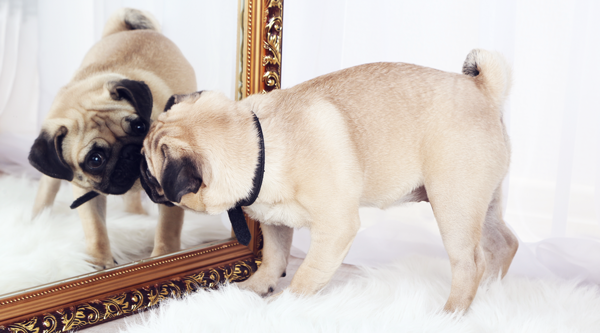 The classic self-recognition test gets a makeover for dogs, using smell not sight
By Julie Hecht, September 2017

Alexandra Horowitz wants to know what it’s like to be a dog. Even her Twitter bio is dog-aware: “dogs sniff me; I sniff them back.” Her popular writing and research—at Barnard College’s Dog Cognition Lab in NYC—explore the unique experiences of the dog. Her recent publication in Behavioural Processes tackles the hefty question of their self-recognition.

But first, my teeth.

It was probably a good two hours post-lunch before a bathroom mirror informed me that I had a big piece of green gunk in my teeth. I was able to make this find—accompanied by “#$@&%*! Why didn’t anyone tell me?”—because I know mirrors reflect me, Julie. Faced with a mirror, we see ourselves: our constants (yup, my eyes are still brown), and our changes (#$@&%*! that pimple wasn’t there yesterday). You and I haven’t always done this. An understanding of self-in-the-mirror appears by age two.

Since the 1970s, researchers have used the mirror as a tool to investigate self-recognition in non-human animals. The main components of the mirror-self recognition test are a mirror and an individual who has covertly been marked in some way. In the original mirror test, chimpanzees—who had secretly been marked on the face with red odorless dye—were found to use the mirror to examine the mark. Something about them had changed. They would touch the mark on their face, in the same way you might touch a newly appearing pimple on your face. Not reaching toward the mirror, but instead using the mirror to refer back to themselves. Since then, the mirror test has panned out in a number of species like chimpanzees, dolphins, Asian elephants, and European magpies.

But dogs aren’t on this list. From personal experience or entertaining YouTube videos, you know that young dogs, or dogs unfamiliar with mirrors, often treat mirrors as another dog. Over time, dogs typically come to ignore mirrors. Studies find some dogs use mirrors to gather information or solve a problem—recognizing it as a tool to help see behind themselves or locate hidden food.

If dogs don’t “pass” the mirror test, is this the end of their self-recognition story? Not so fast. Maybe the traditional mirror test isn’t the most fitting medium for questions-of-the-self in dogs.

After all, dogs are beings of smell, not sight. From quivering nostrils to sizable brain regions dedicated to olfaction, dogs are equipped to take in and process smells. Humans have harnessed this skill and taught working dogs to notice smells we designate important, like the presence of cancer or narcotics.

And then there’s pee. Dogs find certain smells, like dog urine, intrinsically interesting. Dogs both leave, and investigate, urine deposits. It is pee that leads countless dogs around the world to pull humans this way and that when out on a walk (ok fine, dropped food’s also a high priority). With this in mind, Marc Bekoff, professor emeritus of Ecology and Evolutionary Biology at the University of Colorado, proposed researchers turn to urine for questions of “self” and “other” in dogs.

Bekoff’s “yellow snow” study, published in 2001, explored the topic of “me” / “my” and “you” / “your.” His field experiment was as hands-on as it sounds. Over the course of five winters, when out walking his dog Jethro, Bekoff moved urine-soaked snow to see how Jethro behaved when encountering his own pee versus that of other dogs. Jethro performed as expected, sniffing other dogs’ urine more than his own. Jethro, Bekoff suggested, “clearly had some sense of ‘self’: a sense of ‘mine-ness’ but not necessarily of ‘I-ness’.”

Alexandra Horowitz’s new study takes into account the main features of the mirror test as well as the “yellow snow” study. She devised a test explicitly suited for dogs—an olfactory mirror test. Think about it: In the visual mirror test, individuals attend to something visually different about their appearance. An olfactory mirror test, Horowitz explains, asks whether dogs attend to something changed about their own smell when their “smell image” has been changed by the addition of a new odor. This new odor, of course, aims to be equivalent to the mark, in mirror terms.

Over two experiments, Horowitz measured how long companion dogs sniffed different odor samples simultaneously presented to them in canisters. More sniffing, you can imagine, is akin to more interest. Given my interest in dog attention to chemical information—yes, I mean pee sniffing— you can imagine I was elated to participate in this study and present canisters to 36 wonderful dogs in Experiment 1. Horowitz found that dogs spent more time investigating their own urine that had been marked (modified with the addition of an odor), compared to their urine alone. “Me different,” you might conclude from the dog’s behavior.

Or maybe there’s another explanation. Dogs are neophilic, known for their interest in new things. Could it be that dogs spent more time sniffing their marked urine because they were interested in the new smell, independent of their own smell? Dog behavior better translated as: familiar smell over here = boring, but familiar smell mixed with new smell = interesting?

With this possibility in mind, dogs also investigated their own urine marked versus the mark substance itself. These trials eliminated novelty as a factor because both canisters contained the novel odor. In these trials, dogs did not differ in the amount of time spent sniffing each sample. Ruh roh. Where does that leave us?

This is where the scientific process shines. Could it be that the selectedmark itself affected the results? In the classic mirror studies, the mark aims to be inherently neutral, not highly unique or interesting on its own—an ink mark, a piece of tape, a sticker. Ho hum. The mark in Experiment 1 of the olfactory mirror test was a cancerous tissue sample from a dog, an unfamiliar odor (adding novelty) that untrained dogs are said, anecdotally, to notice. It’s possible the cancer cells were too interesting and novel, thus deviating from the neutral mark used in classic mirror tests. In fact, a number of dogs encountering canisters with the mark had pronounced “disgust” responses, highlighting that the selected mark might not have been so neutral.

Horowitz tried a different mark. Experiment 2 tested 12 dogs with a more neutral mark—anise essential oil from the sport of Nose work. In these trials, dogs replicated the main findings, investigating their own urine that had been marked more than their urine alone. But this time, dogs were also more interested in their marked urine than the mark alone, making it less likely that the mark’s novelty explained the results. Horowitz reflects, “This suggests that the longer investigation time is not tied to an interest in the mark, per se, but rather an interest in the mark when it appears in combination with or on the dog’s own odour.”

With a new olfactory approach in place, studies will surely continue to refine and tease out the meaning behind dog interest in familiar—yet modified—scents. Inquiries like the olfactory mirror test put the microphone in the paws of the dog. If they could comment, I’d imagine they’d say, “Thank you for considering our pee! After all, pee means so much to us!”

This story was originally published by Scientific American. Reprinted with permission.

Bekoff, M. 2001. Observations of scent-marking and discriminating self from others by a domestic dog: tales of displaced yellow snow. Behav. Proc. 55, 75–79.

Horowitz, A. 2017. Smelling themselves: dogs investigate their own odours longer when modified in an “olfactory mirror” test. Behav. Proc. 143, 17–24.

Photo by Atanas Teodosiev on Unsplash