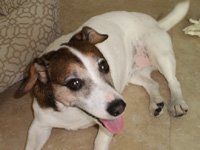 The Jack Russell is an energetic breed of small terrier that was originally bred for fox hunting; to have high stamina for the hunt, as well as the courage to root out foxes that had retreated to their dens. As such these dogs need exercise and stimulation to avoid mood and behavioral problems associated with restlessness and boredom. White-bodied and smooth with a rough or “broken” coat; the reason they are white is because hunters needed to be able to tell their dogs from the prey.

These hardy dogs have not changed much in the past two centuries, and their average lifespan averages 13-16 years. They are instinctively a working dog, and while bred to chase red foxes, they are also used to eliminate numerous ground-dwelling prey such as groundhog, badger, or grey fox. The Jack Russell originated with dogs that were bred and used by Reverend John Russell in the early 1800’s and is related to the Fox terrier as well as the now-extinct English White terrier. These dogs have a tempered aggressiveness to allow pursuit and capture of foxes without harming them (which would end the chase, which was considered “unsporting”) Reverend Russell reportedly prided himself on the fact that his terriers never tasted blood.

After World War II, there was less need for hunting dogs, so the role of Jack Russells changed. Now they are more commonly chosen as family and companion animals. Cross breeding with Welsh corgis, Chihuahuas and other smaller breeds of terrier has produced breeds known as Puddin’ Dogs and Shortie Jacks. Jack Russells are a very popular choice for movies and other types of show, as they are very intelligent, athletic, fearless, and vocal. Nipper was a Jack Russsell who was the inspiration for the painting “Dog looking at and listening to a Phonograph”, which was later renamed to “His Master’s Voice”, and is still in use today as a logo. Another Jack Russell, named Bothy, visited both the North and South Poles; and Chalky was a star on TV in the UK. “Eddie” on the US TV show Frasier was played by two dogs; a father and son named Moose and Enzo, who also played “Skip” in a movie called “My Dog Skip”. Wishbone was the subject of a popular children’s show, and there are numerous others.

Because of their high energy and drive, Jack Russells are ideal for numerous dog sports; excelling at flyball or agility. However, they can be stubborn at times and even aggressive towards other animals and humans if not properly socialized, so obedience training is highly recommended. They really do have an incredible amount of energy for their size, which can sometimes lead to trouble with larger animals. Apparently tireless, they will often still be energetic after you are worn out. If they are well-socialized, they can be good with children, but they will never tolerate abuse even if it is accidental. Overall, the Jack Russell is a great family pet, and a teriffic companion for those who enjoy an active lifestyle.