Catnip. Is it a drug? 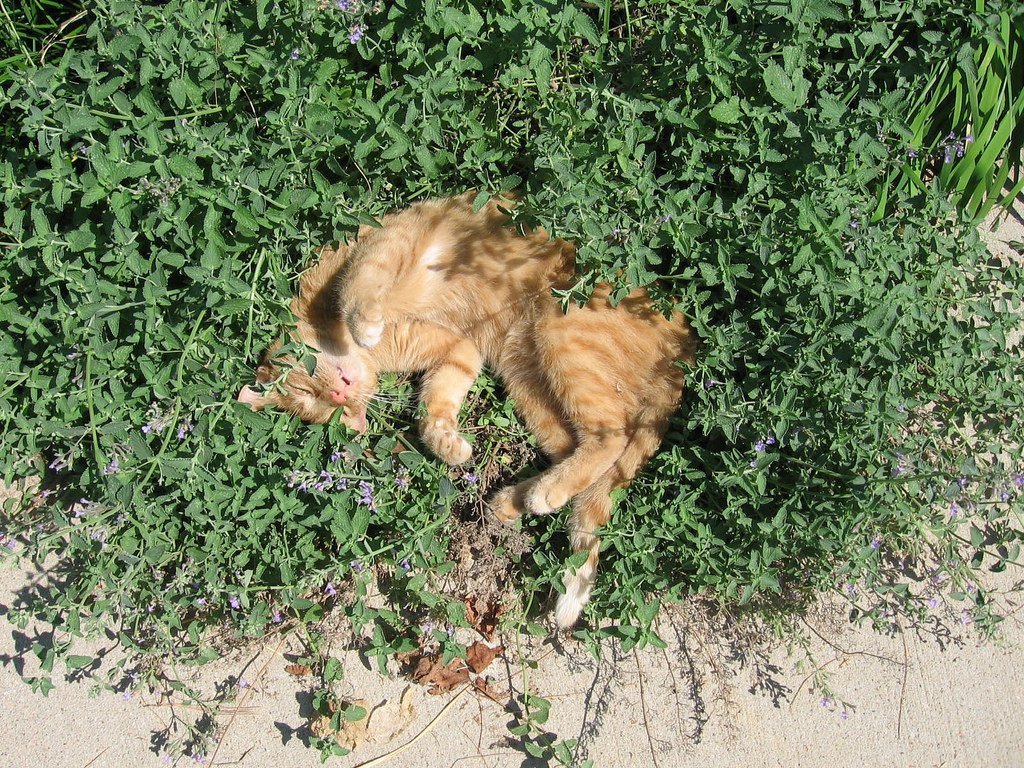 Is Catnip a Drug for Cats?

You can tell when your cat has just sniffed catnip. She licks, sniffs, purrs and shakes her head, only to return to her normal self about ten minutes later.

While you’re happy to see your cat in a state of euphoria, you might wonder, “Is catnip a drug? Does catnip get cats high? Is it harmful?” Read on as experts share their expertise and offer tips on how to choose the best catnip for your kitty.

What Is Catnip and How Does It Work?

Nepeta cataria, also known as catnip, is a plant belonging to the mint family. You can recognize catnip plants by their green, jagged-edged leaves and off-white to lavender-colored flowers that start blooming in late spring. Contained within its stems and leaves is nepetalactone, a volatile (or essential) oil that’s behind your cat’s strange behavior.

To experience euphoria, a cat has to smell the catnip. “Cats, unlike humans, have a functional extra scent organ called the vomeronasal gland located in the roof of the mouth. The vomeronasal gland carries a scent collected in the mouth to the hypothalamus in the brain,” explains Dr. Melinda Leshy, a veterinarian with MedVet Columbus in Ohio.

Nepetalactone mimics a cat’s sex pheromones, says Dr. Tina Wismer, medical director at ASPCA Animal Poison Control Center in New York City. “The compound is similar to a female cat being in heat, and the cats enjoying it exhibit behaviors similar to female cats in heat (although both male and female cats show these behaviors.)”

Does Catnip Get Cats High?

It’s obvious your cat is enjoying herself, but catnip high is very different from human drug use and addiction. So what does catnip do to cats? “They aren’t hallucinating. They’re aware of their surroundings. They are just ‘much happier’ about everything,” says Dr. Nancy Dunkle, founder of Exclusively Cats Veterinary Hospital in Medford, New Jersey. “So, it’s not something that you should avoid with your cat due to a drug or bad habit stigma.”

Catnip doesn’t have any known long-term effects on a cat’s brain or any other part of her body, and it isn’t addictive, says Dr. Dunkle. “In fact, cats habituate quickly to it.”

The behaviors a cat displays after sniffing catnip last around 10 minutes and then wear off, says Dr. Leshy. “It may then take over 30 minutes away from the catnip for the cat to again become susceptible to the ‘high’ feeling.”

Not All Cats Respond to Catnip

Catnip effects vary, and some cats don’t react at all. “I’ve had cats who get playful and giddy, others who become very sensuous and rub or groom the catnip sprinkles or toy a lot, and other cats who ‘just sit’ on it,” says Dr. Dunkle.

Some cats on catnip become loving, while others may become seemingly more “aggressive” says Dr. Wismer. “You may want to separate the cats if one seems more aggressive towards another.”

There is evidence that a cat’s response to catnip is genetic, says Dr. Andrea Sanchez, senior manager of Operations Support for Vancouver, Washington-based Banfield Pet Hospital. “Studies suggest approximately 60 percent of cats will react behaviorally to catnip, and some will go ‘crazier’ than others. One study found about 20 percent of cats displayed active behaviors, while the rest were mostly passive or more relaxed than usual. Some will also feel the effects for longer than others.”

It’s actually a dominant trait, explains Dr. Leshy. “So if one parent or both parents are responsive to catnip, then their offspring should also be responsive.” She says cats in Australia have little interest in catnip. “Obviously there is a different gene pool there.”

Kittens typically don’t react to catnip until they’re 6 months to 1 year of age, says Dr. Dunkle. “There are some exceptions to this in which cats don’t become sensitive to catnip until they are much older, or they slowly increase their sensitivity over a period of years.”

The Benefits of Catnip

Cat behaviorists often recommend catnip for relief during stressful periods, like traveling, when introducing a new pet, or moving to a new home, says Dr. Dunkle. “I personally use it to ease my cat’s separation anxiety when I go away for a long weekend. [I] give her a fresh Yeee-ow organic catnip … right before I leave, and she plays with it and rubs against it while I’m gone. When I get back I see less evidence of stressed behavior.”

Catnip is considered a form of environmental enrichment. “Cats have a highly developed olfactory system and in the wild would encounter an array of different smells. The use of catnip can help timid cats experience playful behaviors and help keep playful cats from becoming bored,” says Kim Sparks, a registered veterinary technician with MedVet Columbus.It may also have some pain-relieving properties, adds Sparks. Additionally, “The ingestion of catnip may be helpful to the digestive tract, as it is has been used in humans for its anti-diarrheal and spasmolytic (ability to relieve spasm of smooth muscle) properties.”

Fresh catnip is much more potent than dried catnip, so less will go a longer way, says Dr. Sanchez. “In fact, too much catnip at one time can cause health problems for cats, so it’s advised to work with your veterinarian to determine the right amount for your cat. Also avoid highly concentrated catnip oils.”

If you’re unable to grow your own catnip plants, there are several effective options on the market. “Cat parents can purchase cat toys with dried catnip stuffed into their hollowed cores. Loose, dried catnip is also available for purchase in jars, bags and cans. Catnip sprays allow you to spray your cat’s favorite toys to achieve a similar effect, which is a good alternative if your cat gets a sensitive tummy after trying to eat catnip,” says Dr. Sanchez. You can try the SmartyKat Skitter Critters catnip toy mice that are stuffed with catnip or cover your kitty’s scratchers with KONG Naturals catnip spray.

Not All Catnip Is Created Equal

There are differences in catnip quality. “Catnip should seem very strong to the cat parent to affect the cat. My personal favorite catnip brands (per trial and error with my patients and my own cats over the years) are Ratherbee and Yeee-ow,” says Dr. Dunkle. If you offer a catnip toy, she says to “Make sure that it contains properly dried catnip leaves and buds versus just being sprayed with catnip scent.” Check labels for unnecessary additives, cautions Sparks. “We would recommend sourcing organic catnip with no additives.” To maintain potency, she recommends storing dried catnip in the refrigerator. “Also, as with any spray product, use caution, and don’t spray around their eyes. It is best to spray the catnip on cat furniture or a small towel.”

Catnip is considered nontoxic to cats, but on occasion can cause vomiting, diarrhea, dizziness and trouble walking if your kitty is exposed to too much of it, says Dr. Sanchez. “Depending on your cat’s personal reaction to catnip, you may choose to control the amount of the plant available to your pet, limiting your cat’s exposure, or denying access to it altogether. Work with your veterinarian on the right balance for your individual cat’s needs.”

If your cat has a history of feline asthma, you should ask your veterinarian about giving catnip, as dried catnip can sometimes cause breathing issues for these cats.

Like Loading...
Categories: UncategorizedTags: cat, cat sitting, catnip, pet sitting
Are you Feeding your Dog too Much?
Mani/Pedi Time